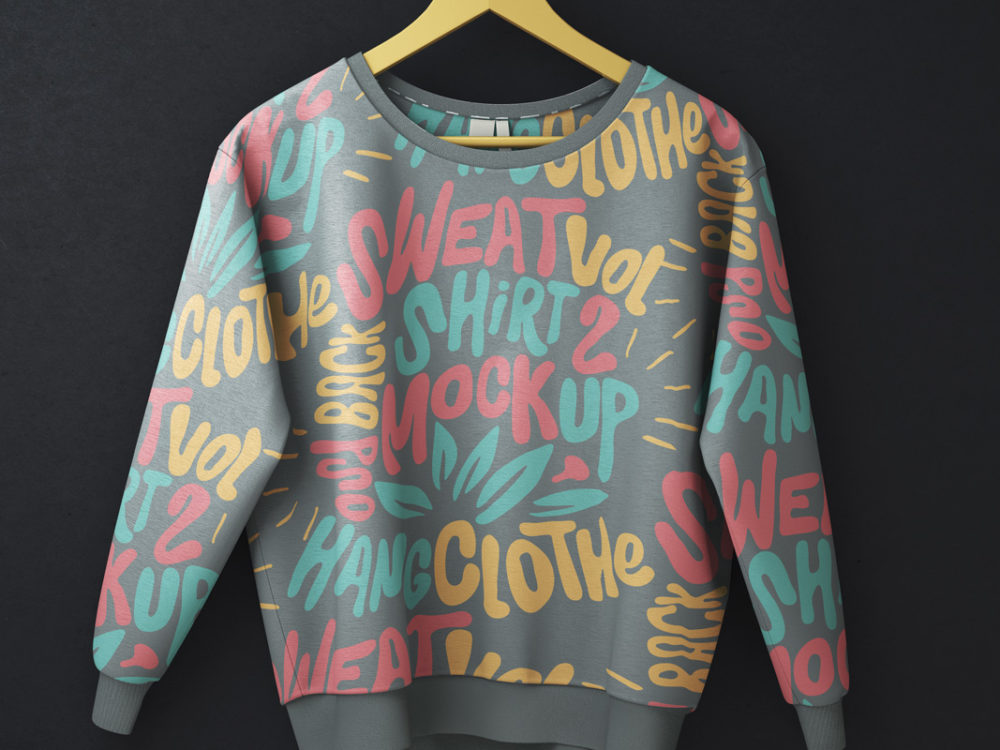 Whether you’re exercising, running an errand, or aiming for a smart-casual look, sweatshirts will never fail you. Aside from keeping you warm and absorbing sweat, this comfortable garment will keep you fashionably ready for any season. They’re flattering to every body shape and can be paired or layered with most clothing that people wear. With its versatility, designers and sellers have the freedom to design them according to their customer’s preferences. To see how your apparel design will look like before printing them, use a sweatshirt mockup!

Here at GraphicXtreme, we bring you our collection of sweatshirt mockup sets to help you present your designs for your branding, fashion, or marketing projects.

A Curated Collection of Sweatshirt Mockup

On this page, you will see a large collection of sweatshirt mockup both created by us and found elsewhere on the internet. This exhaustive collection provides easy to use Photoshop Mockups for any type of sweatshirt you are promoting.

Front and Back Sweatshirt 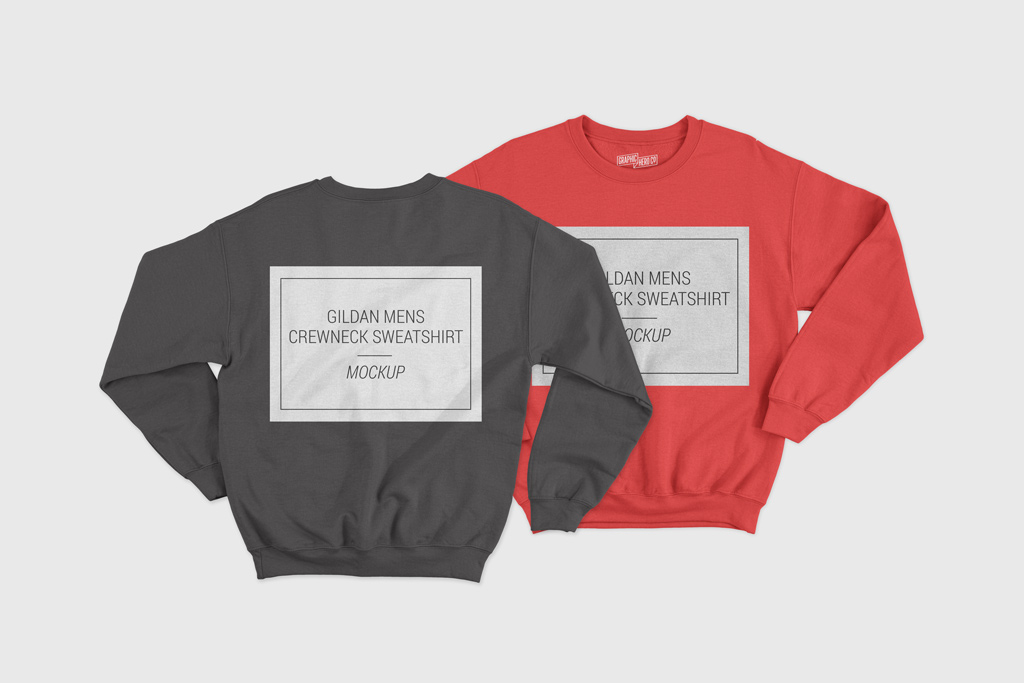 Who doesn’t love a good sweatshirt? This mockup is a good mockup to use to showcase your design not just on the front, but also on the back of a sweatshirt. It’s easy to use so you can easily add your artwork or logo. It makes for a perfect sweatshirt to snuggle in.

Sweatshirt in a Wooden Background Mockup 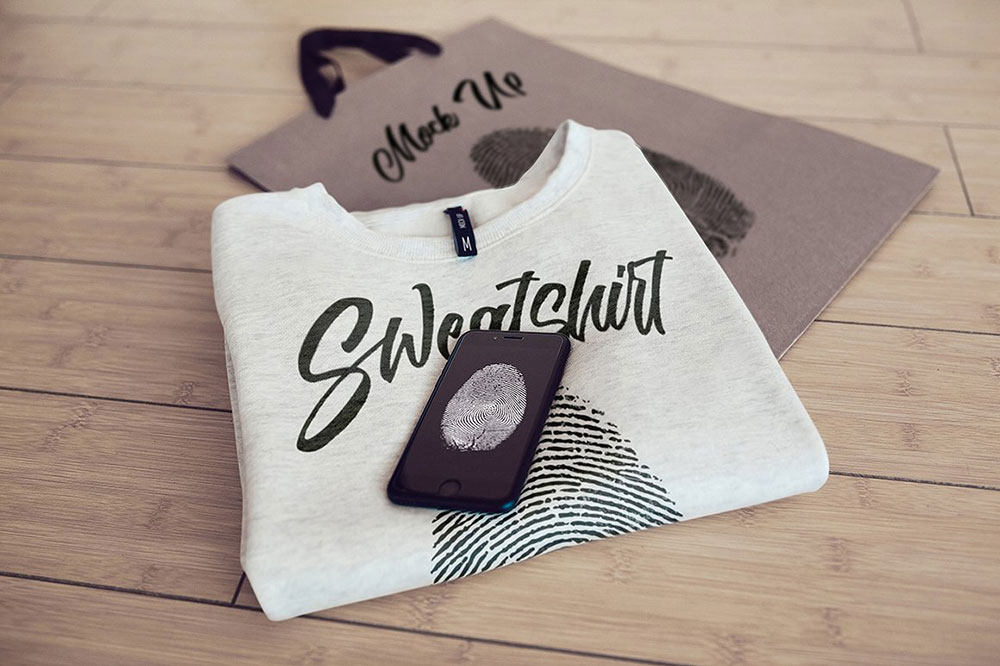 This mockup features the sweatshirt folded neatly and placed on a wooden floor. The contrast between the floor and sweatshirt puts the highlight on the sweatshirt. You can easily add your own artwork or logo. Whether you’re an aspiring designer or an entrepreneur, this mockup will surely work for you. 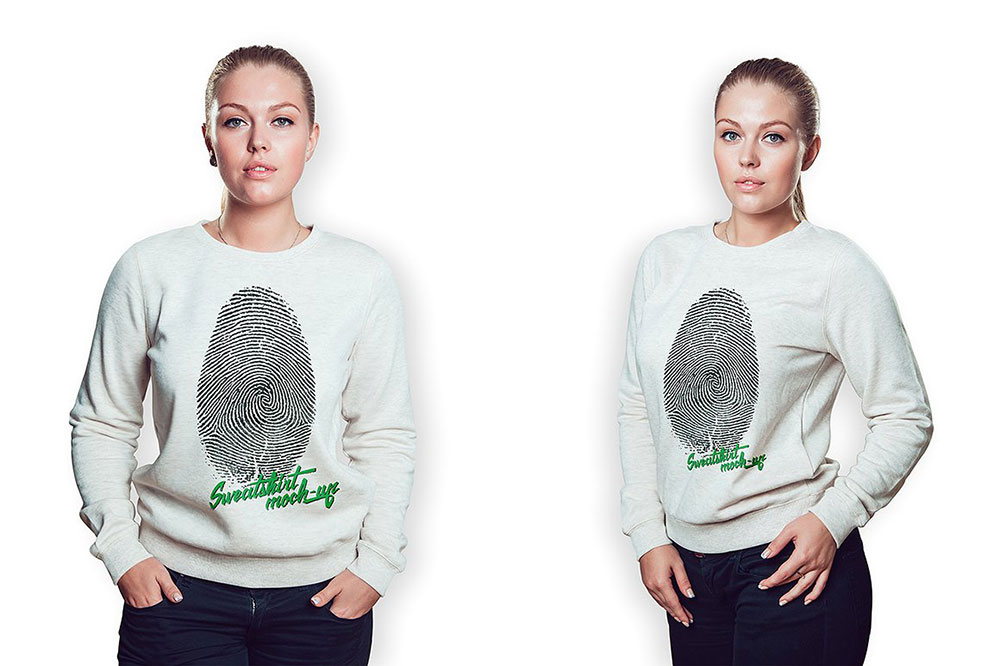 This Mockup of a Woman Wearing a Sweatshirt is a very straightforward mockup, showcasing a woman wearing a white sweatshirt with the design featured front and center. You’re seeing double as this mockup features the same model in two different poses; one facing front, and another on a side view. You can easily add your own design and have it featured not just once, but twice! 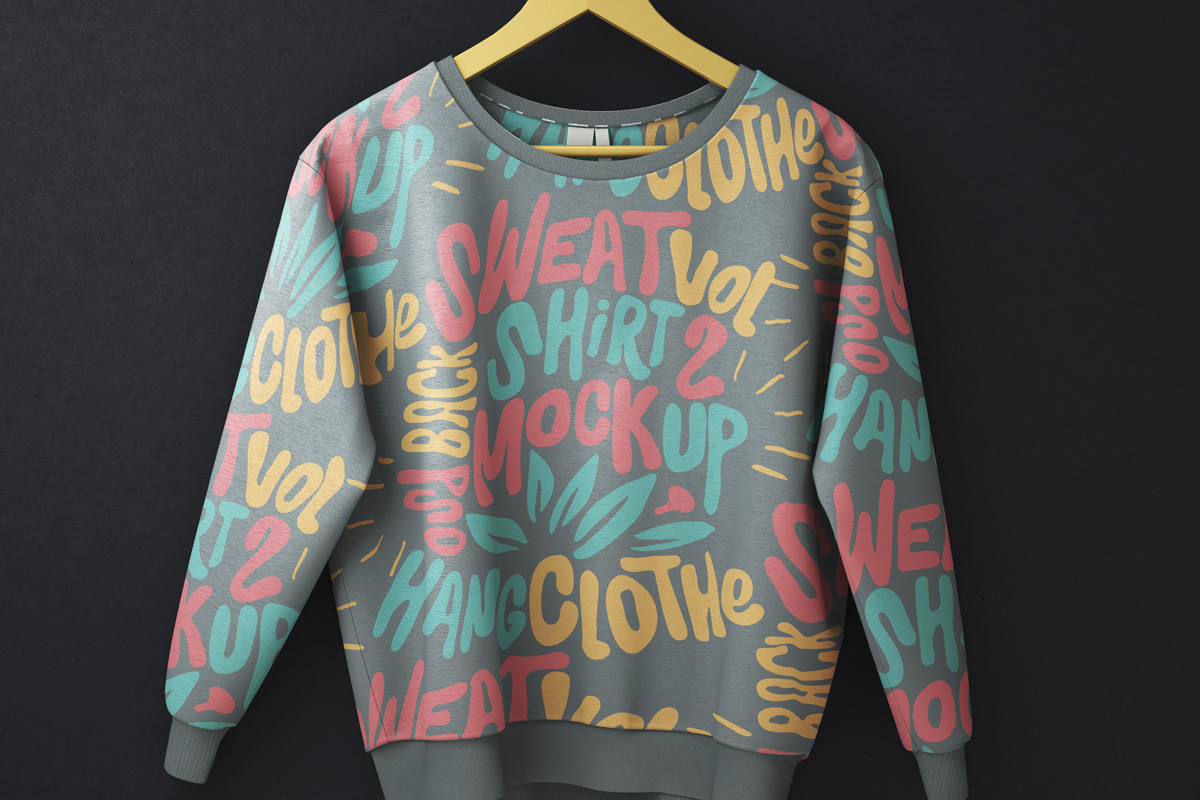 This sweatshirt takes adding color in your life in a whole new level. This mockup showcases a colorful sweatshirt with a plain black background. The absence of color in the background makes the sweatshirt pop. You can choose this design, or add your own. One thing is for sure, this vibrant mockup will certainly add color to your customers’ closet.

This Realistic Sweatshirt Mockup features a very simple red colored sweatshirt against a plain white background. The sweatshirt is placed on a hanger, giving you that photo realistic look of what that sweatshirt will look like inside your closet. This is easy to customize and it’s up to you whether to make your design big or small.

Black Sweatshirt on a Hanger 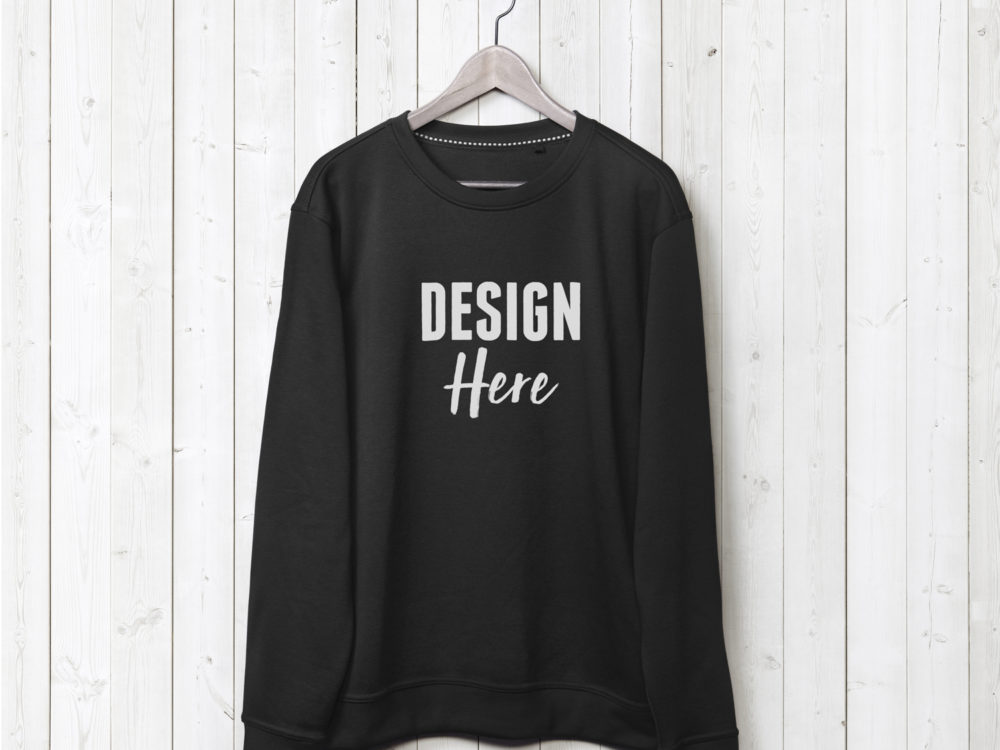 Who doesn’t love a good, ole black sweatshirt? You will surely love this mockup. It showcases the black sweatshirt on a hanger, with a white wooden background. The contrast of the background versus the sweatshirt color really makes the design pop. You can use a white color for your design, or customize it from its design to color. 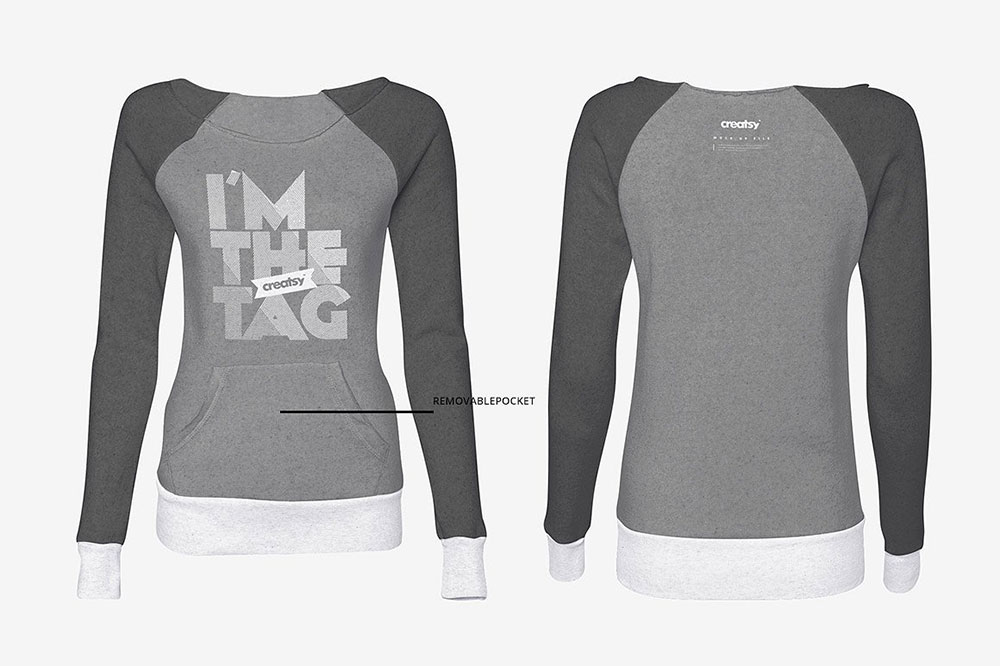 This mockup showcases not just a frontal design, but also the back design of the sweatshirt. This lady sweatshirt comes in the color gray, which is a simple and sophisticated color. This sweatshirt comes in long sleeves and is body hugging which your female customers will surely love. 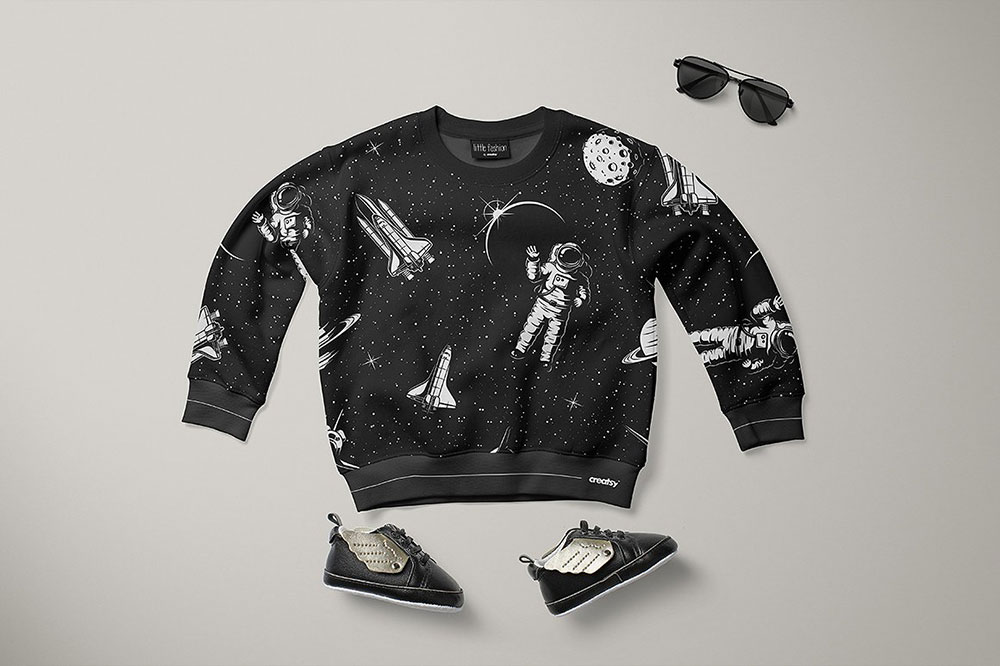 If there’s anything cooler (and cuter) than a sweatshirt, that’s a baby sweatshirt. This mockup is every baby (and mommy’s dream). This mockup showcases an OOTD layout of the sweatshirt, featured alongside a pair of sunglasses and a pair of sneakers. It’s cool and it’s cute, the perfect combo for your baby. 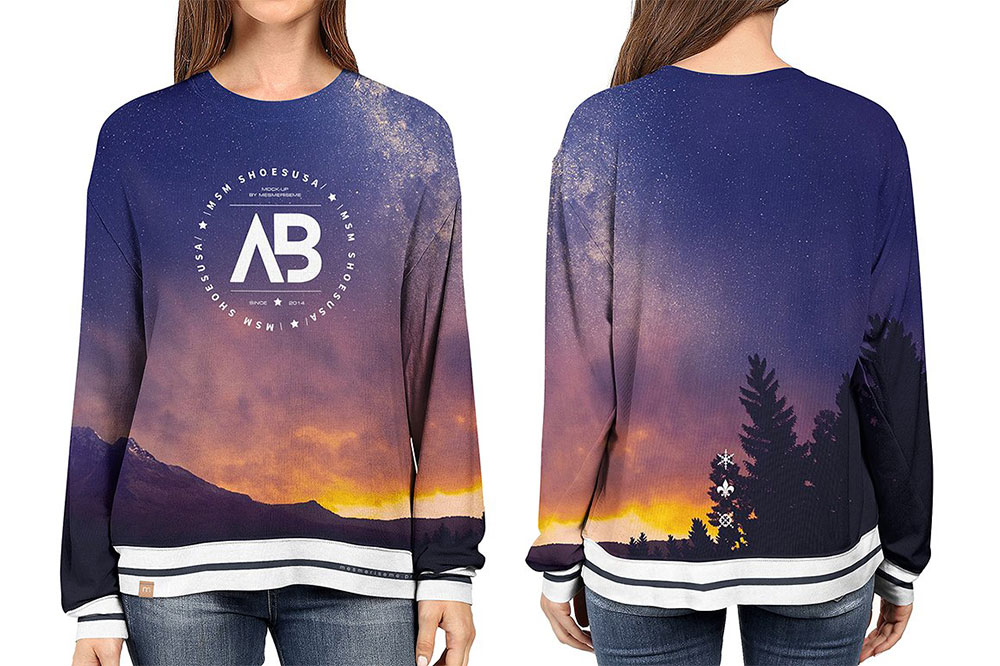 This Oversized Sweatshirt Mockup features a woman wearing a long sleeved sweatshirt and a pair of dark colored jeans. The sweatshirt’s color is that of a galaxy which is purplish with other highlight colors. It’s very cool and attractive to the eyes. The design is featured front and center. This mockup is easy to customize whether you want to showcase your skill as a designer, or sell a shirt. 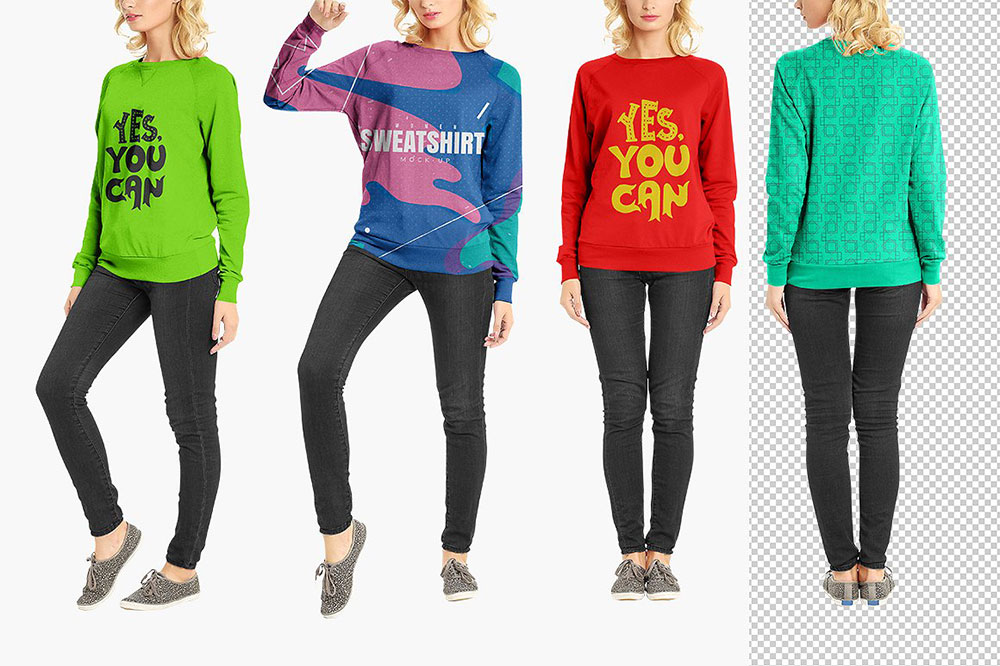 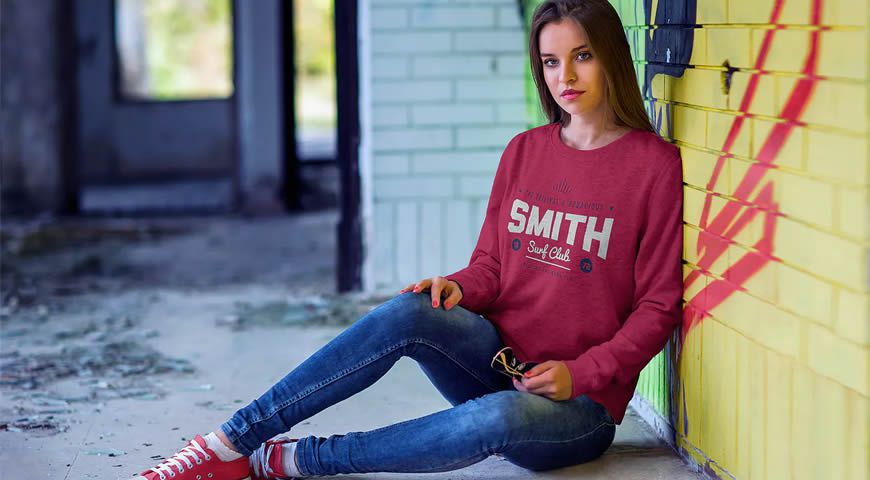 This PSD Sweatshirt Mockup features a woman wearing a red long sleeved sweatshirt, and sitting on a graffiti concrete background. It’s urban meets artsy chic. If you want to promote a sweatshirt that’s fierce and sassy, this is a good mockup choice for you. The mockup is also easy to customize so you can easily add your own design. 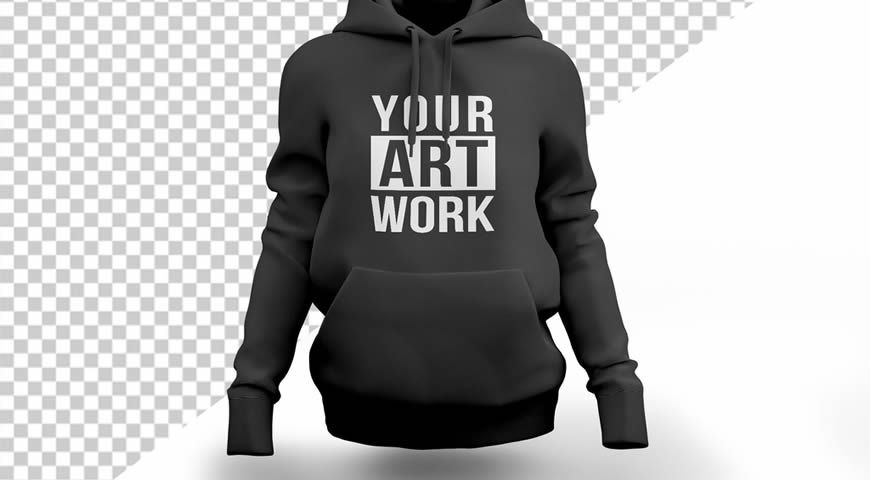 This mockup is simple but hip at the same time. Who doesn’t love a good hoodie? This is a hoodie and a sweatshirt at the same time, the perfect combo. Best of all, it comes in the color black which is a color that perfectly complements everyone. This mockup will work both for your male and female customers. 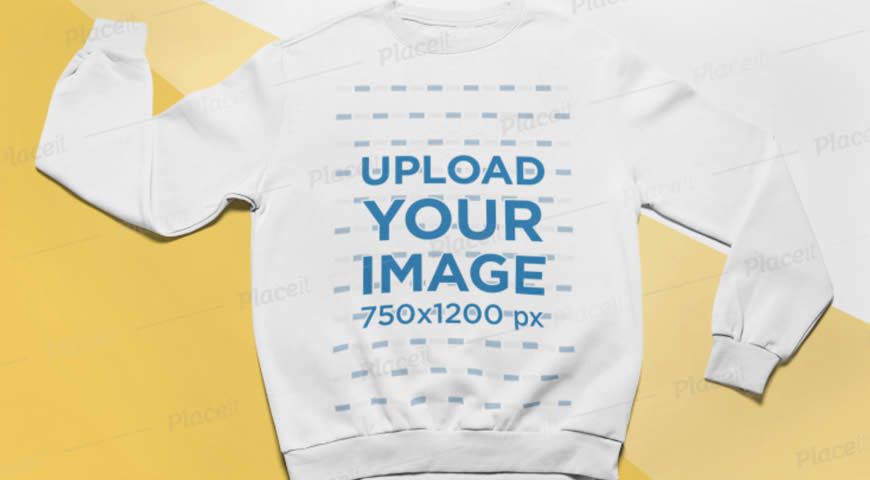 This Crewneck Sweatshirt Mockup is a very simple and straightforward mockup. It features a white sweatshirt lying in a yellow background. The design is showcased front and center, letting you add your own logo or design and make it the absolute star of the mockup. Whether you’re a budding designer or a new entrepreneur, this mockup can surely serve you. 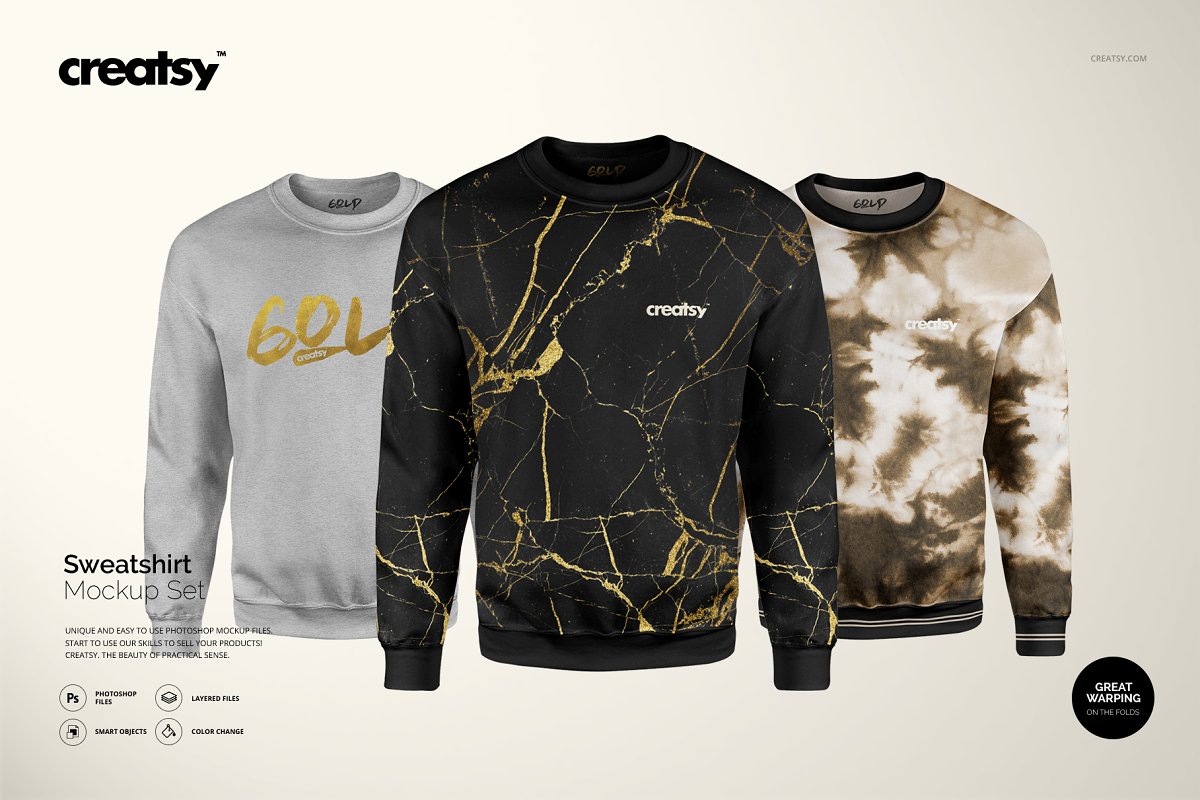 Talk about fancy artsy! This mockup set features three sweatshirts in one mockup, all elegantly designed. They come in different colors, with specks and splashes of different color combinations, giving that artistic feel to it. This mockup is also customizable so you can easily add your own logo. It’s hip, it’s beautiful and it’s an eye catcher. 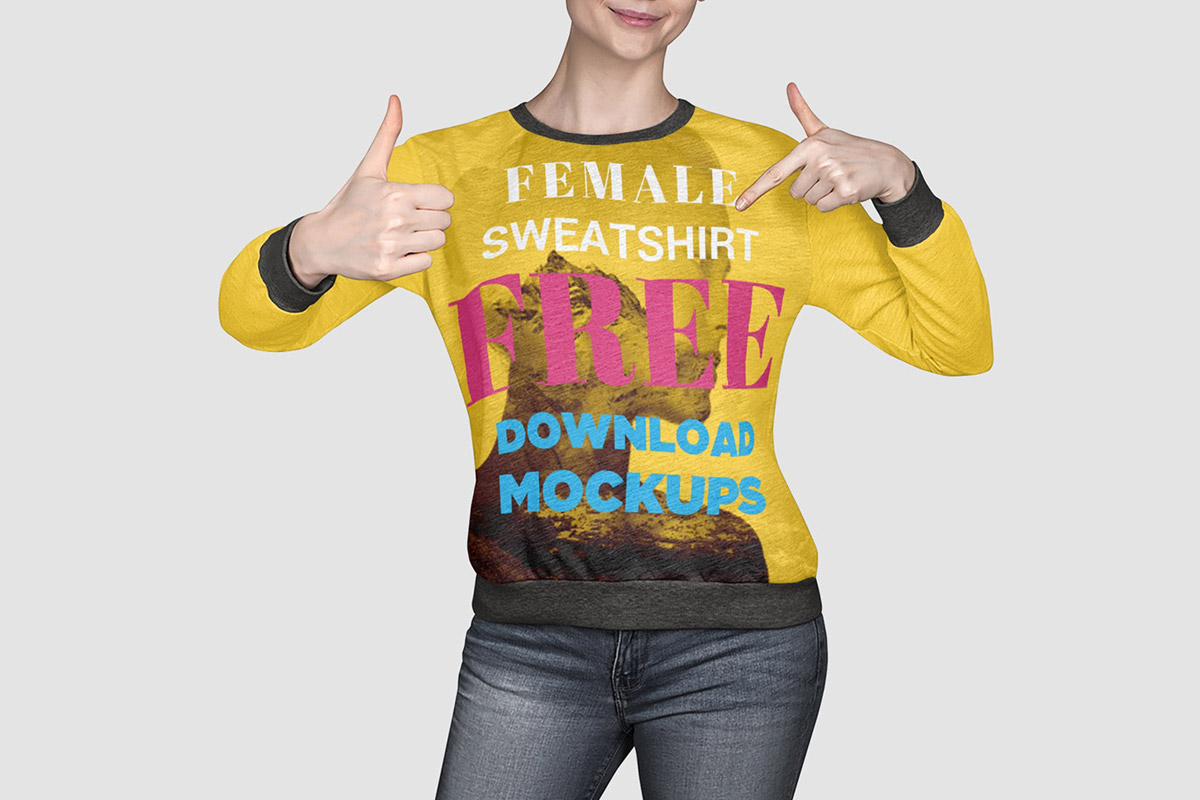 Add a little spice in your customers’ life with this Female Sweatshirt Mockup. This showcases a woman wearing a yellow shirt and dark colored jeans, with the model’s hands pointing on the front of the shirt. This mockup is easy to edit so you can add your own artwork or logo, and make it as big or as small as you’d like. The yellow color gives it that much needed pop to let your sweatshirt shine. 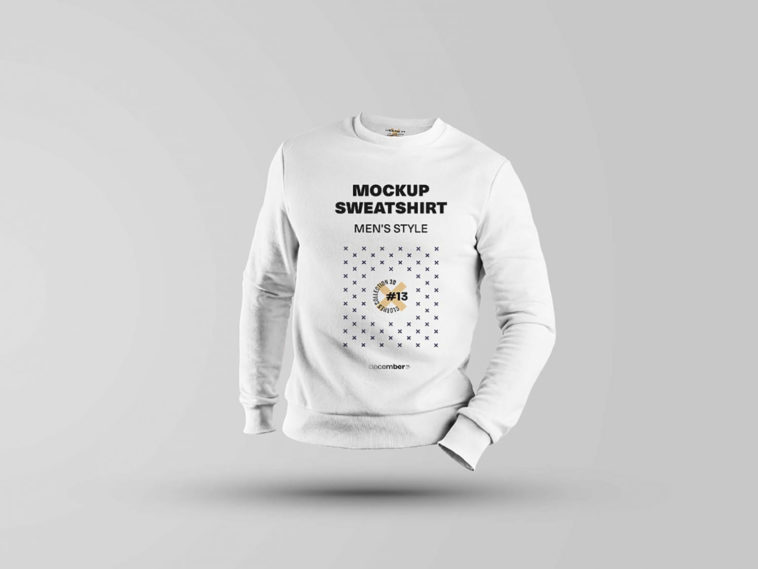 This mockup is a photorealistic image of a white sweatshirt, amidst a plain white background. The simplicity of the sweatshirt and the background’s color, make a good layout for the design to shine through. Whether you want a design that’s big or small, this mockup is certainly a good choice. 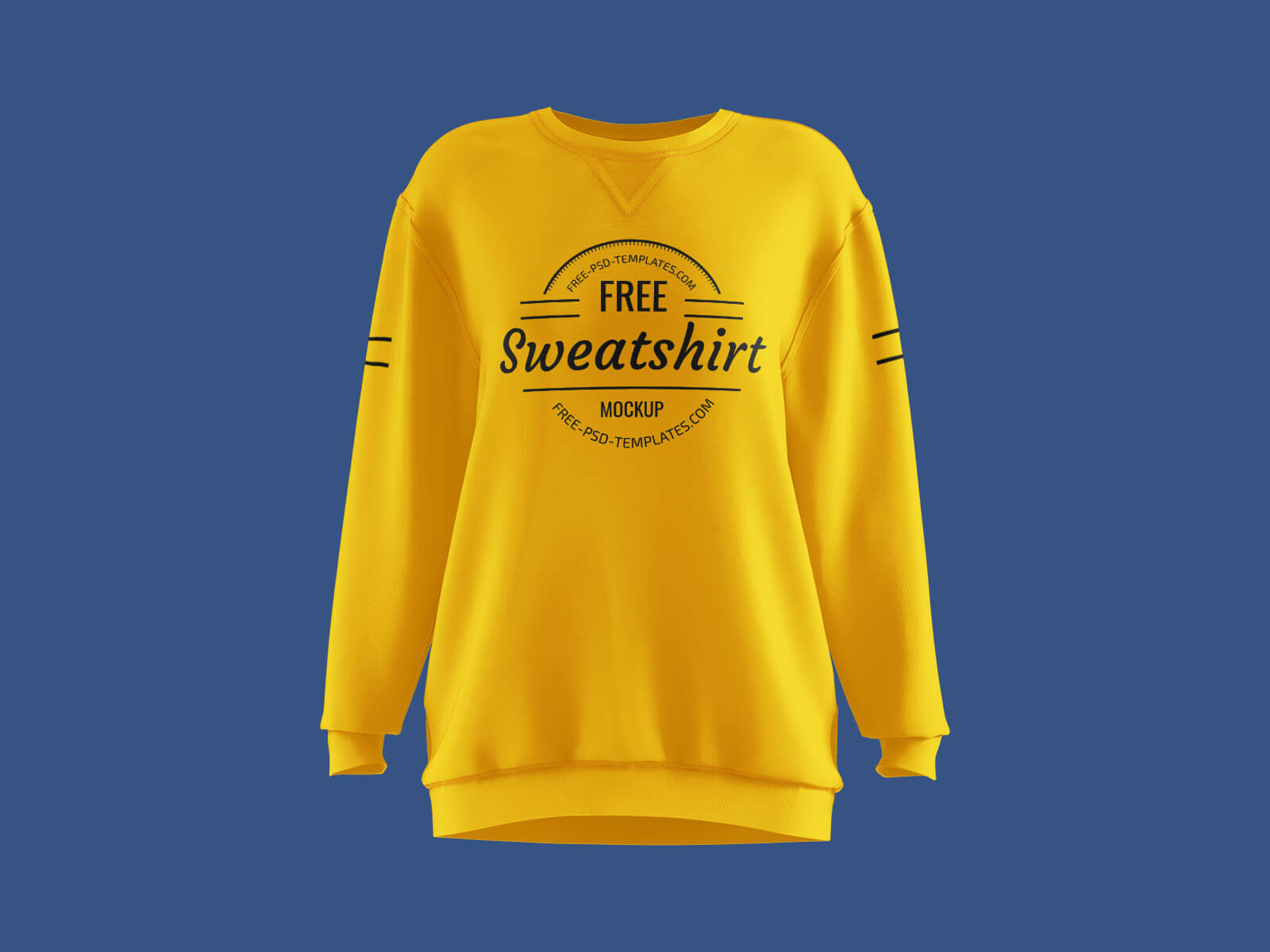 This mockup is a very simple mockup showcasing a yellow sweatshirt against a blue-ish background. It’s simple but the pop of color is an eye-catcher nonetheless. It’s easy to customize so you can add your own artwork or logo. If you want a mockup that’s simple but also rocks, this is the one to go. 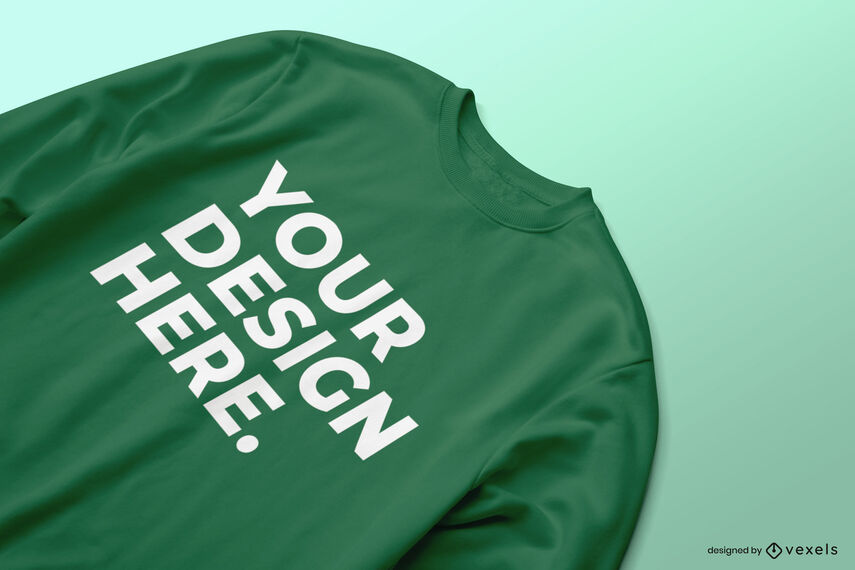 Keep the eyes on the prize, or on this case, the sweatshirt. This mockup showcases a green sweatshirt lying on a mint green background. The attention is directed on the design. Whether you choose a small or big design, it’s sure to be the center of attention. This sweatshirt also comes in a very cool color that your customers’ will surely love. 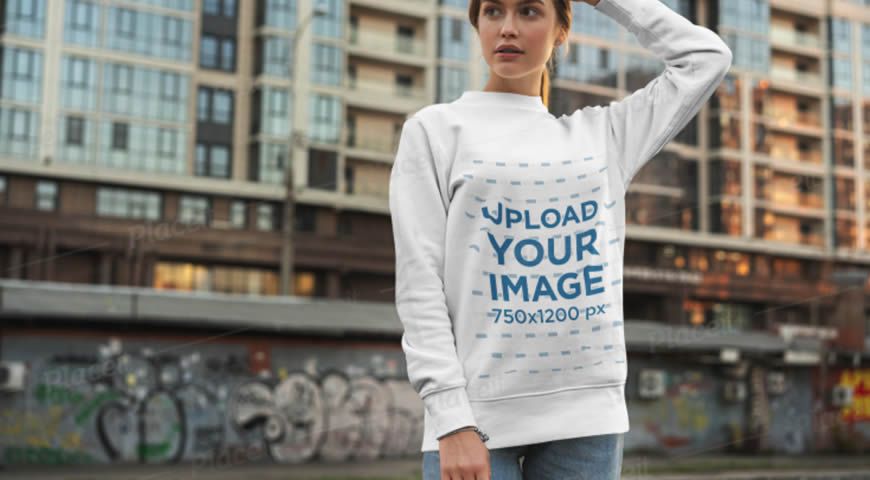 This mockup features a young woman wearing a sweatshirt paired with a pair of washed out jeans, with buildings and bikes in the background. It gives a very city chic vibe. It’s modern, but also very refreshing. It’s a good mockup to promote your design or sell your own sweatshirt. 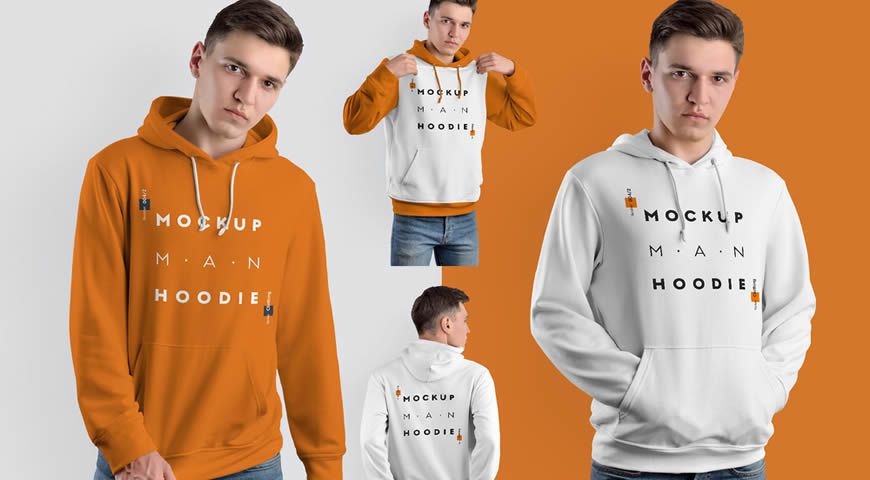 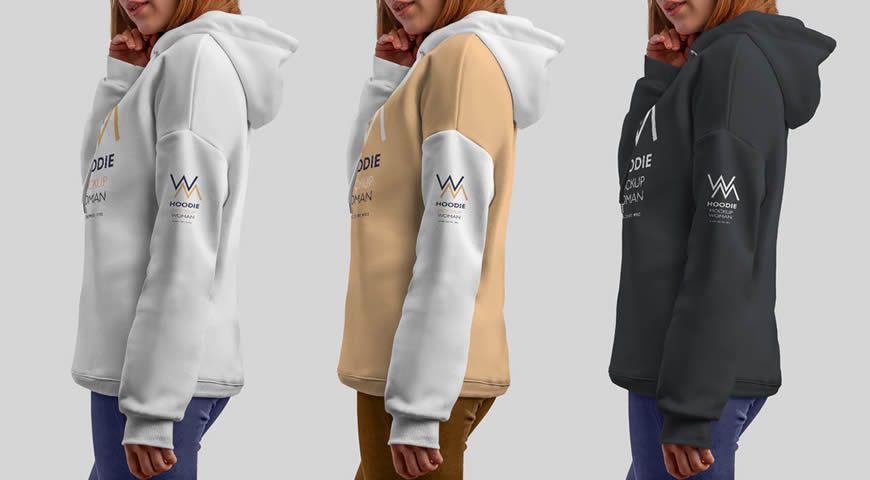 This mockup for Women showcases the same sweatshirt design in three different colors, side by side, by side. The designs on the front and side sleeves of the sweatshirt is highlighted. This sweatshirt is also hooded, which is definitely something your lady customers will love. It’s very comfy and chic. 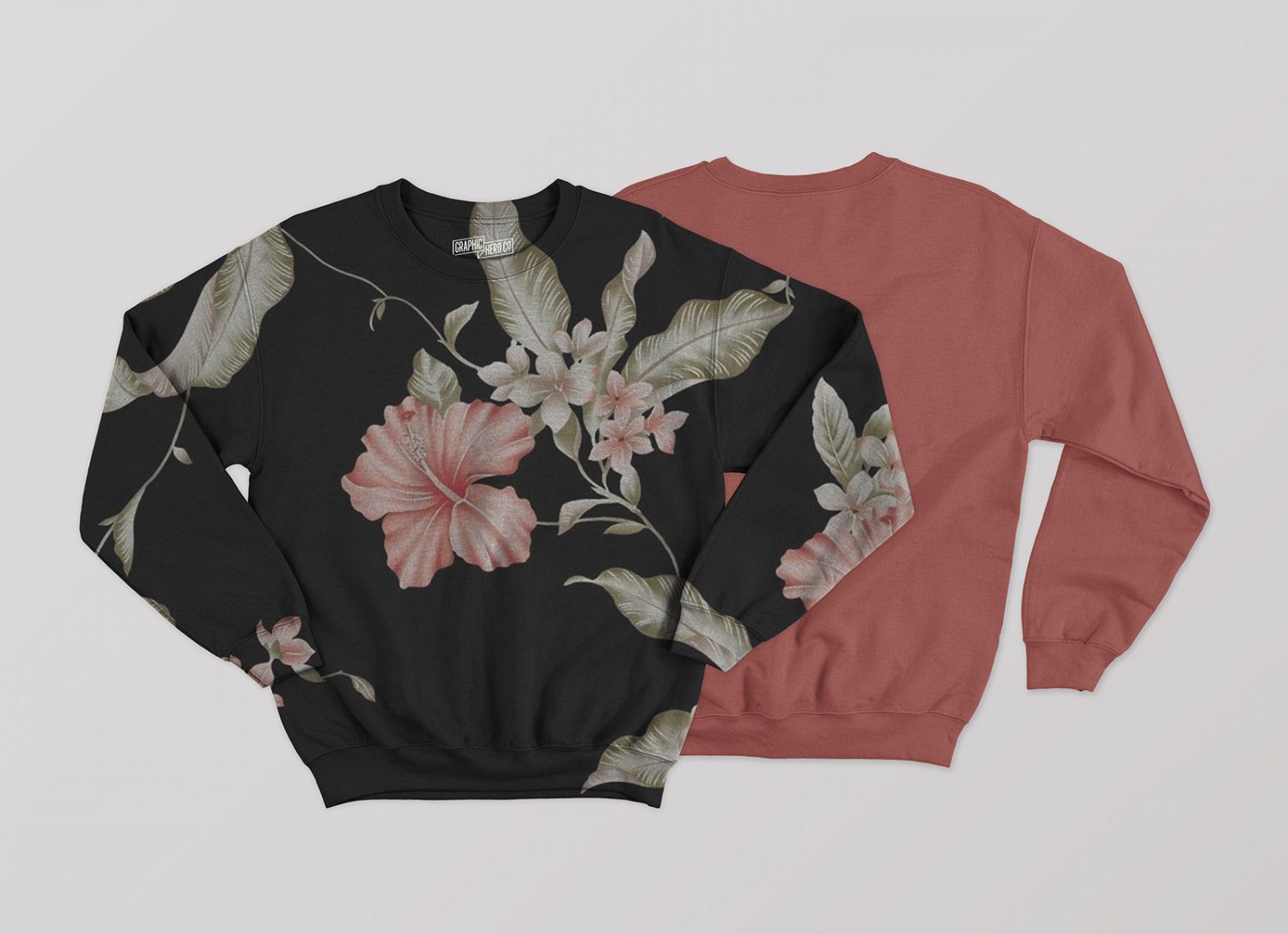 This mockup features two very dainty crewneck sweatshirts for women. One is in pale pink color, and the other is black, laced with flowers. You can choose the same colors and designs, or add your very own. One thing is for sure; your women customers can’t resist how pretty these sweatshirts are. 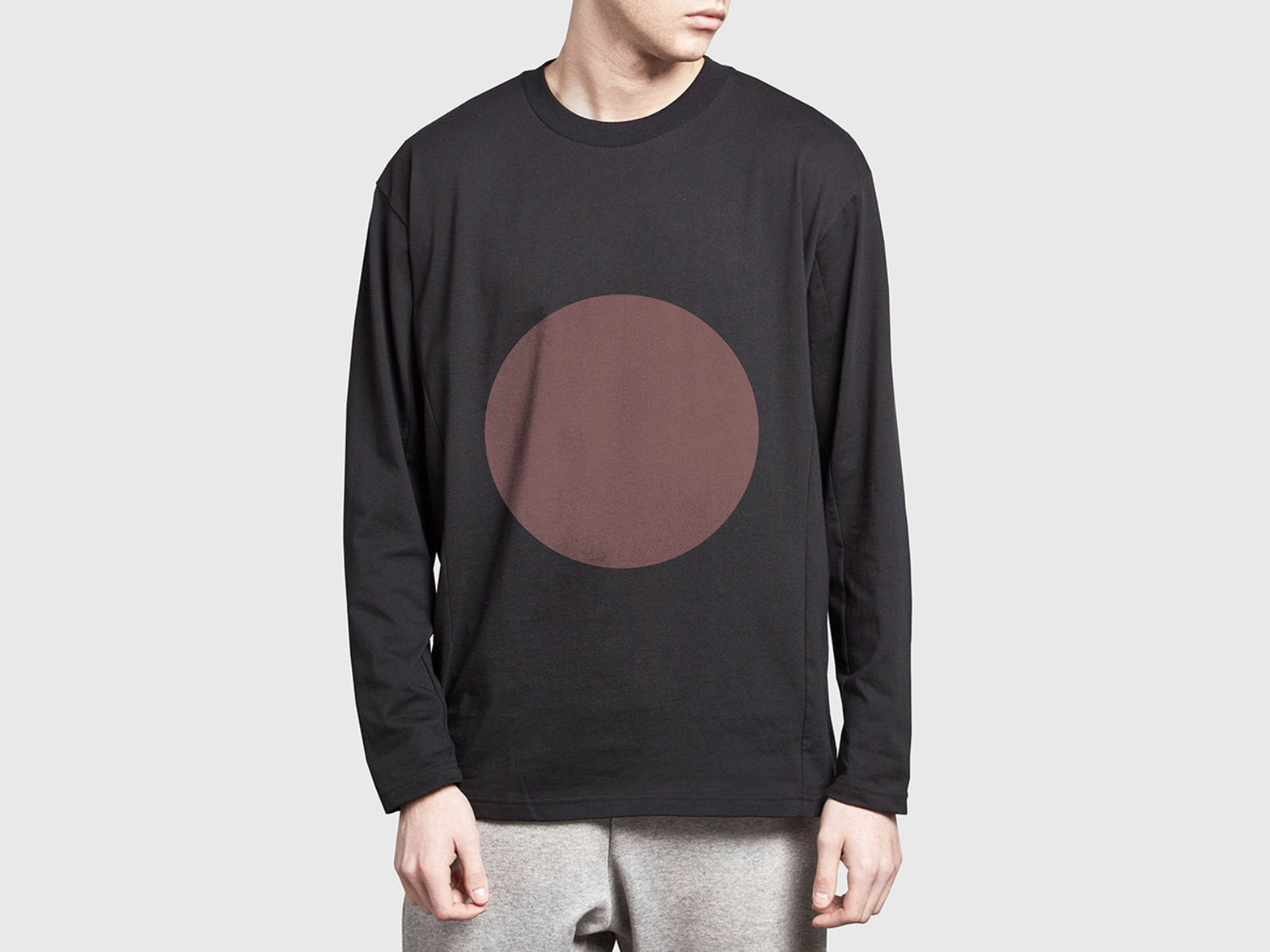 This mockup is a simple but visually stunning and realistic mockup showcasing a man wearing a dark colored sweatshirt. There’s no particular design featured, but you can customize this easily and add your own artwork or logo. The plain white background makes for a perfect background to make the sweatshirt’s design stand out. 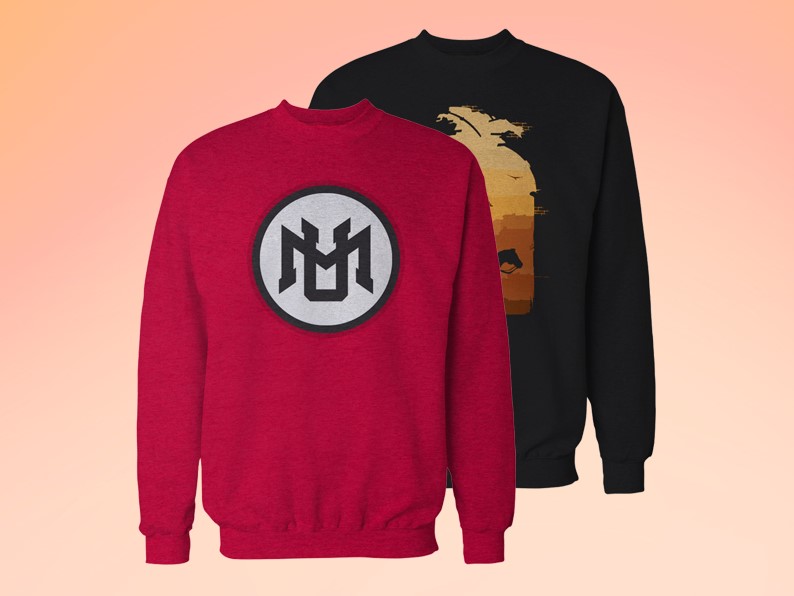 If you want to promote a sweatshirt that can work for him or her, this is the mockup of choice. It showcases two sweatshirts, one in pink and another in black, against a light pink background. The light colored background makes the sweatshirts pop. These are easy to customize too and you can easily add your own design. 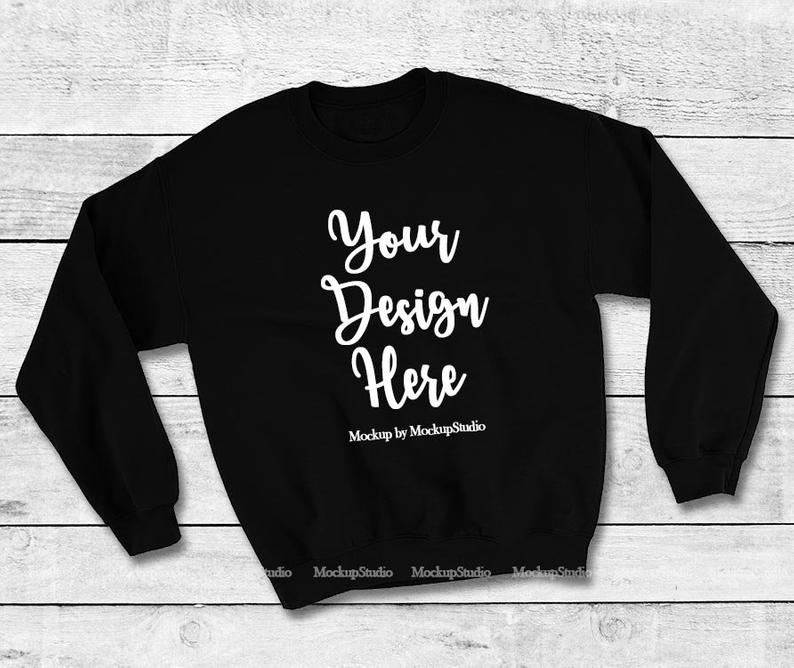 This mockup is a classic sweatshirt. It showcases a black colored sweatshirt against a white wooden plank as a background. The sweatshirt is laid out with the design front and center. You can easily customize and add your own artwork or logo. Whether you’re a designer or an entrepreneur, this mockup will work wonders for you.

Get a little creative help with our complete collection of sweatshirt mockups! Whatever creative direction you have in mind, we got you covered. From simple to most elaborate, we’ve got everything that would wow you or your clients’ needs. Just hit the download under any of the mockups to could get started!