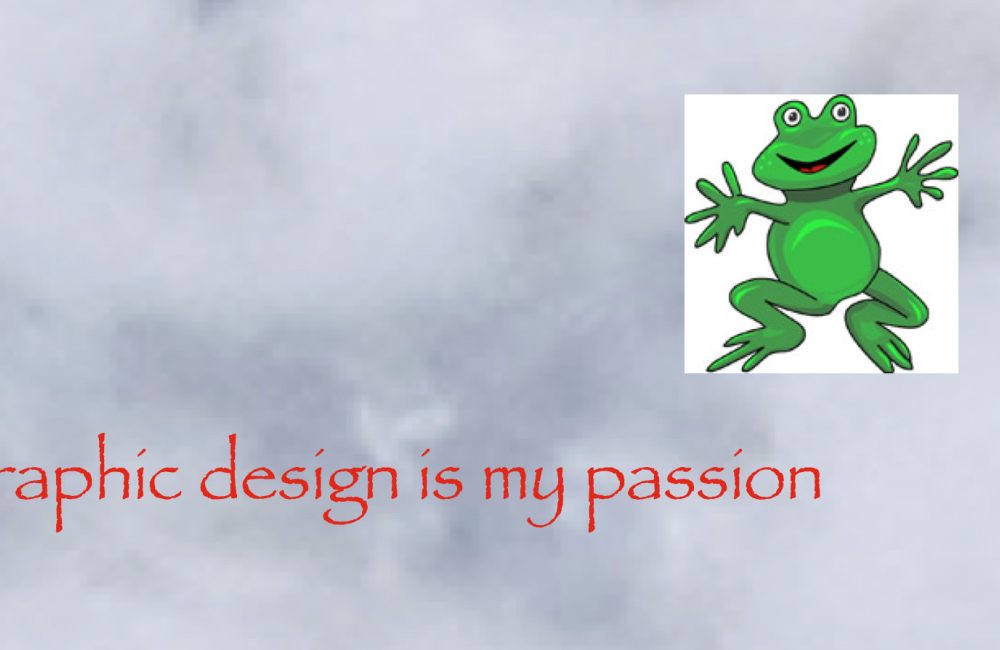 Graphic Design is My Passion. This is more than a statement. Graphic Design is My Passion is a phrase that shows everyone who you are and what you create. The phrase is used as an expression by graphic design companies, visual artists, and self described graphic designers in self-advertisement sharing their work with everyone on the internet. Simple enough right? Well, it was until something happened. Something that took on a different shape through social media and became a whole new phrase and meaning only the way a viral post can.

Origin of Graphic Design is My Passion

On July 7th, 2014, Tumblr user Yungterra posted an image of a cloudy sky with a green cartoon frog clip art and the caption “graphic design is my passion” written in the Papyrus typeface. Over the next year, the post gained over 352,000 notes. The cartoon frog from graphic design is my passion memes can be found on the clipart website Classroom Clipart, where it displays a copyright date of 2011.

On August 10th, Tumblr user kykiske submitted a text post containing the sentence “tumblr staff: graphic design is my passion.” The following day, the GraphicDesignIsMyPassion Tumblr blog was launched, which highlights images and posts referencing the phrase. This launched the phrase into a whole new level of notoriety.

The Two Groups that Make Graphic Design is My Passion Possible

A harmless and innocent clichéd phrase has taken on an entirely different turn into a sarcastic slogan for images that feature clip art cartoon characters that are superimposed over a dark, cloudy background. We all have different levels when it comes to graphic design and the form of art we use to express ourselves. Talent and ability can be spotted right away in a professional graphic design piece used by a large company or in an advertisement spot. The use of graphic design has taken on the novice through introductory spaces of print and digital design. These novice artists will tell you they entered a skilled group of designers not by choice but out of necessity, almost forced into this creative space.

Graphic Design is My Passion is a phrase that you will never hear uttered or shared from these novice artists who find themselves in a brand new field surrounded by talented graphic designers. In fact, graphic design wouldn’t even be a space they would consider themselves to be in or work. If you asked these novice users if they were graphic designers they would answer no. Who are they? They are the staff member in charge of events at their job or place of employment. They are the volunteer worker who has a computer among the other members helping out the nonprofit. For the sake of this article let’s call them the volunteer event promoter.

The Common Differences in Created Graphics

Let’s look at the type of design pieces that are created by the volunteer event promoter that are used to inform employees of a company and volunteers of a nonprofit. Most of the graphics designed by the volunteer are used to promote upcoming events, provide general information about the company or organization, or advertisements that go out to the public about the company or nonprofit. Keep in mind this isn’t a professionally trained artist at work in most of these cases. This is just someone looking to get the job done and inform everyone about the Christmas party that is next month. The primary focus they are going to put into the graphic is the date, time, location, and any key information the attendees would need to know. This is created to be informative not to be applauded as a graphic design masterpiece.

There isn’t a lot of time devoted to font selection. In fact, there is a high possibility that the font used to create the Christmas party flyer is one of the default fonts that come pre loaded into the software being used. Graphic designers wouldn’t dare consider one of these default fonts. A graphic designer would probably spend the same amount of time that it took the volunteer person to create their entire piece just to search for a font. They would be searching for a font they have never used before on a new project. In fact in the original image used for Graphic Design is My Passion, Papyrus font was chosen by the creator. This font is a go to for most novice and never used by graphic designers.

Color palettes and layout are also an after thought for the generous volunteer graphic designer. Transparent images are rarely considered to make sure the graphic looks professional or all in one piece. Transparent images remove the background color from an image so that the focal point appears cut out. This way the image can be laid on top of dark clouds without a white background square like the original Graphic Design is My Passion image.

The volunteer event promoter or staff member should be applauded. Sure some of their creations may end up in the Graphic Design is My Passion blog or being tagged #graphicdesignismypassion on social media. The novice graphic designers are just trying to fill a need among the staff or volunteer team and for the most part they are getting the job done. Keep creating. Keep making graphics that get the message out there no matter if it reaches the unintended audience that could possibly laugh at the piece.